Ohio Supreme Court lawsuit attaches evidence showing the County repeatedly, falsely denied existence of emails about the jail between Budish and former budget director Maggie Keenan, in which Keenan warned Budish about the crisis in the jail. 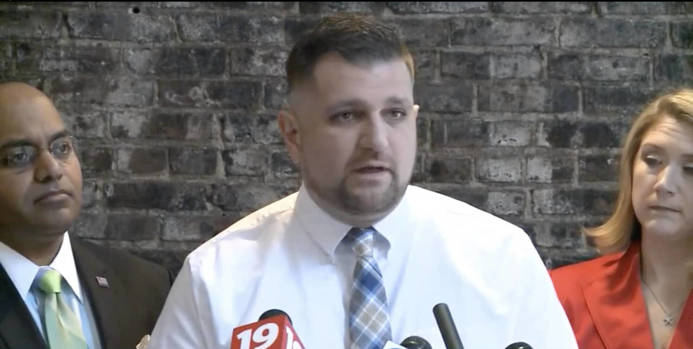 On July 16, 2019, Nurse Brack requested specific public records from Budish, including emails between Budish and then-director of the Office of Budget and Management, Maggie Keenan, from January 1, 2018 through May 24, 2018 about the County jail. In four separate letters—on July 31, 2019, August 20, 2019, October 7, 2019, and October 21, 2019—Budish’s county law department falsely denied any such emails existed.

Earlier this week, the State of Ohio filed a notice in the criminal case of Cuyahoga County Chief Talent Officer Douglas Dykes accusing him of “an act of witness intimidation and retaliation” by participating in Keenan’s firing on December 11, 2019. Attached to that motion were copies of emails showing Keenan’s cooperation with state investigators. On February 15, 2019, Keenan forwarded an email chain to an investigator with the Ohio Attorney General’s Office. That email chain contained an email dated April 18, 2018 from her County email address to Budish’s County email address, along with former Budish chief of staff Earl Leiken, containing details of the County jail nursing crisis.

Keenan’s April 18, 2018 email detailed nursing vacancies at the jail and described how the jail was “having difficulty attracting candidates due to the low wage.” Keenan’s email also addresses the high cost of engaging temporary nurses rather than staffing the positions with employees and the accompanying hit to employee morale. Keenan’s April 18, 2018 email goes on to describe the jail as “over-crowded, prisoners are sleeping on mats on the floor, and our population is disproportionately unhealthy.” She said “[a] shortage of nurses creates risk” and pointed to the expense of settling a death-related medical lawsuit.

Keenan’s April 18, 2018 email was never produced by Budish and the County in response to Brack’s public-records request—even after this recent public revelation through the criminal proceeding of its existence. Keenan’s email clearly falls within the scope of Brack’s request.

Budish fired Keenan, who alleges she was fired for being a whistleblower.

Nurse Brack’s attorney Subodh Chandra said, “Keenan’s April 18, 2018 email to Budish proves the county executive knew about the critical shortage of nurses before the deaths of nine inmates in the County jail. Yet for months, the County has been repeatedly lying by insisting no such email existed. This failure is symptomatic of the crisis of integrity plaguing our local government. It is long past time for Cuyahoga County to come clean about all aspects of the human-rights crisis it has created—and known about—at the jail.”

Chandra added, “Public records are the people’s records. Anyone is entitled by law to copies of them. It is an extremely serious matter for a government to lie repeatedly in response to a public-records request—falsely claiming an easy-to-find document doesn’t exist when it does. That’s no 'mistake' or 'accident.' We’re going to get to the bottom of this.”

Brack also has a pending federal lawsuit alleging that he was removed from his MetroHealth position at the jail at Budish’s behest in retaliation for sounding the alarm about dangerous jail conditions during a May 2018 County Council committee meeting. (This was just a month after Keenan’s email to Budish alerting Budish to the liability risk the nursing shortage posed.) That case is stayed while the criminal case against one of the defendants—former director of regional corrections Kenneth Mills—proceeds. Mills is charged with tampering with records, obstructing official business, falsification, and dereliction of duty for his criminal mismanagement of the County jail. Mills resigned in the run up to a scathing report from the United States Marshal’s office in November of 2018 excoriating the jail’s mismanagement.

Chandra Law has filed six other federal and state lawsuits against the County and its corrections officers in the last year over a pattern of abuse, torture, deliberate indifference to medical needs, and other misconduct in the jail to which this email that the County hid would be relevant. The others include:

The firm has also had to file other public-records mandamus actions for jail victims against the County over its consistent failure to provide the people's documents and videos of jail torture.