The case stemmed from the prior administration’s misguided decision to hire a fire chief with deficient training. 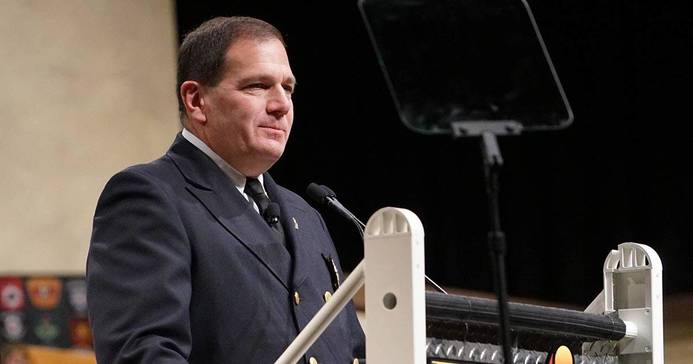 CLEVELAND, OH – Yesterday, the city of Cleveland agreed to pay nearly $1,000,000 to resolve former Cleveland Fire Division Battalion Chief Sean DeCrane’s First Amendment–retaliation and other claims against former Assistant Public Safety Director Edward Eckart, the City, and other Cleveland officials. The $990,000 settlement follows Eckart’s September 2021 loss of a Sixth Circuit appeal of a decision denying him qualified immunity from suit. The matter was set to proceed to trial in federal court on June 27, 2022.

Court documents, public records, and sworn testimony in the case showed as follows.

Local media become aware that fire Chief Daryl McGinnis’s failed to complete recertification training required for his job—to the embarrassment of city officials who had been notified of the issue.

On July 16, 2013, the city of Cleveland received a public-records request from a Cleveland.com reporter, who sought “all of Fire Chief McGinnis’ fire and EMT training records since 2000.” Those public records, produced weeks later, would expose that the fire chief had failed to complete training required for his job. As the information was released to the public, Chief McGinnis was relieved of his duties and soon retired.

DeCrane, a fire battalion chief and widely respected fire-safety expert, was the director of the city’s Fire Training Academy when the records request came in. Just months before the request, DeCrane was a finalist to become Cleveland’s new fire chief, ranking second behind McGinnis.

Shortly before McGinnis’s became chief, DeCrane notified Eckart that there were issues with McGinnis’s training. Eckart, who oversaw the process of reviewing chief candidates, notified Safety Director Martin Flask and Mayor Frank Jackson of the issue, and they called McGinnis. McGinnis maintained that his training was up to date. In his deposition, Eckart acknowledged that with a phone call he could have requested conclusive documentation, but he did not. Eckart “never thought that somebody would lie about their training requirements,” and inquired no further until the records request.

Cleveland officials, led by Eckart, engage in a persistent pattern of retaliation against DeCrane.

The press coverage about Chief McGinnis’s lack of basic training reflected poorly on the city and its public-safety officials.

As one of Eckart’s subordinates, Chris Chumita, testified, Eckart was openly upset about the leak, repeatedly bringing it up. ECF #147. So was Mayor Frank Jackson, who admitted in his deposition (and other witnesses confirmed) that he said multiple times that the leaker threw McGinnis “under the bus” and had “better watch it. That’s for sure.” ECF #146, ECF #151-1, ECF #151-2.

DeCrane was not the source. But when Eckart told others in 2013 who he suspected, DeCrane was one of the very few names Eckart mentioned. ECF #147. Eckart himself admitted that, between January and July 2013, DeCrane was the only person who had told Eckart about McGinnis’s training deficiency. ECF #140.

After the “McGinnis leak,” City officials—particularly Eckart—took a series of actions against DeCrane based of their mistaken belief that DeCrane was the media’s source:

The administrative charges against DeCrane remained pending against him when he retired from the Fire Division on September 11, 2016—after a 25-year career in public service for the city. By then, DeCrane had lost hope that the persistent retaliatory actions would stop. Years had passed since the public embarrassment surrounding McGinnis’s training, but Eckart was still needling DeCrane about it in late 2015. Then the administrative charges were left to hang over DeCrane’s head, clouding his career and reputation.

One curious aspect of the case was the divergent testimony of former fire chief Patrick Kelly. During the case, Kelly signed a sworn declaration in which he testified about the Mayor Frank Jackson's anger about the McGinnis leak and Eckart’s subsequent actions against DeCrane. ECF #151-1.

But after Kelly embraced being jointly represented by same attorneys representing Eckart—which Chandra Law viewed as a conflict of interest, Kelly’s testimony transformed. Kelly signed a second declaration for the city's lawyers in which, as the Sixth Circuit remarked, he disputed his own prior sworn testimony.

When flip-flopping, Kelly alleged that a Chandra Law Firm law clerk during an interview of Kelly did not tell him that Kelly should not disclose privileged attorney-client communications. Unfortunately for Kelly and his outlandish allegation, the interview had been recorded. The recording proved that the law clerk had warned Kelly to not share privileged information, and Kelly acknowledged that he understood that warning. ECF # 131.

Kelly’s sworn claims against the law clerk and the firm were, to put it charitably, false. (Kelly is currently the fire chief in Olmsted Township.)

A loss to Cleveland

Subodh Chandra, DeCrane’s lead counsel said, "Sean DeCrane is an internationally recognized and celebrated fire-safety expert—and he was Cleveland's own and grown. Instead of being proud of that, Cleveland officials sought to incinerate his career because they thought he had exposed their own poor decision-making in choosing an unqualified fire chief—and they deprived Clevelanders of one of their finest public servants."

"While the settlement doesn't resurrect the career to which DeCrane aspired since childhood, it does help him move forward even as Cleveland loses what could have been."

Since leaving public service, DeCrane has continued to pursue his passion for fire safety, working as a manager for Underwriters Laboratories (UL) and speaking internationally on fire-safety issues.

The First Amendment protects public employees’ right to speak as private citizens partly because public employees often have valuable insight into the operations of government.