Voting advice for Ohioans for the 2020 presidential election, from a voting-rights litigator (pandemic edition)

Subodh Chandra has litigated voting-rights issues for over 14 years. Here's his practical advice to Ohio voters to ensure their votes are timely cast and counted. 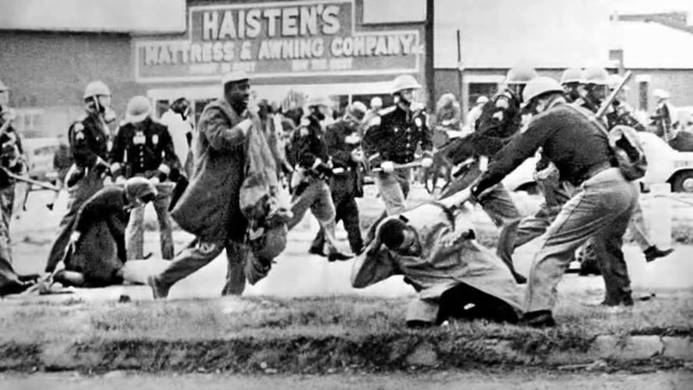 John Lewis being beaten on what become known as "Bloody Sunday," 1965, as he marched for the right to vote.

Since 2006, I've litigated many times on behalf of nonpartisan voting-rights groups and individuals against Ohio's Republican secretaries of state over their—and the Republican General Assembly's and governors'—various voter-suppression schemes that are all well calculated to shave off numbers of poor and minority voters from being able to vote easily. (Currently, for example, I'm co-counsel in a federal challenge to the constitutionality of the Secretary's edict that Ohio's counties be limited to one ballot drop box per county regardless of population, leaving Cuyahoga County's 850,000+ voters with the same number of drop boxes as counties with as few as 5,000 voters.)

From those experiences, here's the best, practical advice I can offer Ohio voters to ensure they can cast their ballots—and that those ballots will be counted:

(1) Verify with your county's board of elections or on the Ohio Secretary of State's website that you are registered to vote where you think you are. Many people will be shocked to learn that the Secretary ordered they be removed from the rolls. So you must check.

(3) Update your signature for the pollbook, if it's been a while since you first registered. We are receiving a distressing number of reports that voters are being told their signatures are no good when the voters request their early ballots. This appears to be a standardless process with lay people—not handwriting experts—making arbitrary decisions. You can do so using this form with your elections board.

(5) The best plan is to vote early, in-person, at your county's board of elections when the early-voting process starts on October 6, 2020 and ends at 2 PM on Monday, November 2. Boards will take pandemic precautions including social distancing and santization procedures, as should you with a mask, glove, face shield, and your own black pen. Do not wait until the end.

If you applied for a mail-in ballot but have now changed your mind and want to vote in person instead, you can do so. If you go to your local board of elections during the early-voting period, you can vote there and it will count as an actual vote. But if you wait until November 3, you will have to vote a provisional ballot, increasing the chance your ballot might not be counted until the board verifies you didn't also mail in your other ballot.

(6) The second best plan is to order your absentee ballot to arrive by mail using this form and drop the completed ballot off in person in the drop box at your board of elections by Election Day, November 3, 2020, at 7:30 PM. You can drop off the ballot application in the drop box too. (Obviously, to avoid long car lines, especially in big counties, drop the ballot off well before November 3!)

By law, you can't gather others' ballots and drop them off—that's called "ballot harvesting." Only immediate family members can drop off each other's ballots.

You can order an absentee ballot if the board receives your request as late as Saturday, October 31, 2020. But waiting that long would be a mistake because of reported intentional delays in the U.S. mail engineered by the president and his postmaster general to interfere with the election.

If you don't drop your completed ballot in a drop box, then you have to have it postmarked by Monday, November 2, 2020, with proper postage ($0.70—two "Forever" stamps will do). But the post office sometimes does not properly postmark ballot envelopes, so there is a risk your vote might not be counted if the envelope lacks a postmark. This has happened. So going to the post office in person by Monday, November 2 to ensure a proper postmark would be wise.

Your mailed ballot must also be received by the board within 10 days after November 3. With the Trump administration forcing the U.S. Postal Service to decommission and destroy mail-sorting machines, waiting until Monday, November 2 to postmark the ballot creates a risk your ballot won't arrive in time and be counted.

(7) Fill your ballot-application form and ballot form with extreme care—not in a rush. Check every field carefully, three times. Get it all right. Leave nothing blank. Submit any required information or documentation. Sign carefully. Courts have authorized boards to disenfranchise voters like provisional-ballot voters over trivial errors on applications and ballot forms—even where the voter's identity is not in dispute—and Ohio's Secretary of State doesn't care and has done nothing to stop that.

(8) If you absolutely must vote on November 3, 2020 in person at your polling location, then check with the board to ensure you have the right location—many long-time locations have been closed and votes cast in the wrong location won't be counted. Vote early that day in case you get redirected to another location or there are long lines. Bring a required form of ID. Here is the list.

(9) Track your Ohio ballot through this portal. Do it! We've heard from many people about one problem or the other with their ballot envelopes, and those problems can be cured using the proper form. So pay attention. Only if the message says your ballot has been processed for counting are you in good shape.

(10) Be a patriot: sign up to be a pollworker. It's badly needed in this cycle. Badly, badly, badly.

I can't overstate this enough: don't wait until November 3, 2020 to make a plan and vote. None of this is too overwhelming if you just make your plan early—and deliver your ballot early. Avoid all the lines. Avoid people.

Get your vote in early!

Let's preserve, protect, and defend our democracy. It's under serious threat this time. A would-be despot occupying the White House and his sick enablers don't want you to vote. They're doing everything they can to keep that from happening breaking every law and norm in the books.

Don't let them get away with it. In 1789, as Dr. Benjamin Franklin left the Constitutional Convention, a woman asked him, "Well, Doctor what have we got—a republic or a monarchy?

Dr. Franklin replied, "A republic, if you can keep it.”

P.S. This page will be updated from time to time as I think of more.

Federal voting-rights trial challenging election laws that are resulting in thousands of Ohio...

Plaintiffs in voting-rights case propose complaint against Ohio Secretary of State Husted and...