Complaint alleges corrections officers tortured her and County Executive Armond Budish’s lawyers are letting the jail hide the evidence from Ms. Glass and her counsel. 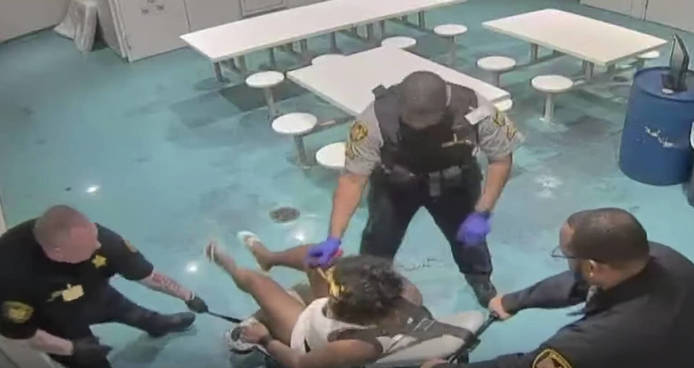 CLEVELAND — Today, a Cleveland woman who was tortured in the Cuyahoga County Corrections Center has filed suit in the Ohio Supreme Court to end her jailers’ efforts to hide the evidence of their crimes.

Police arrested Chantelle Glass last July based on an old misdemeanor warrant out of New Jersey. They booked her into the Cuyahoga County Corrections Center, where, she states, jailers refused to let her make a phone call to tell her family where she was or to find a lawyer.

Video released to the media—but not to Ms. Glass—shows that Corporal Idris-Farid Clark began preparing to attack Ms. Glass before she even entered the room, shaking his bottle of pepper spray in anticipation. Corrections Officer Robert Marsh then brought Ms. Glass out of her cell and strapped her into a restraint chair. Once she was in the chair and strapped down, Marsh hit her in the face, and Clark grabbed her hair while emptying his bottle of pepper spray into her face. Other officers stood by and did nothing.

After the attack, guards dumped a bucket of water on her and left her alone in a cell for hours, and they refused to provide her any medical care. She was eventually released from jail without any charges.

Since then, Ms. Glass and her attorneys at The Chandra Law Firm LLC have been trying to obtain records about her time in the jail, and about the discipline meted out to corrections officers Clark and Marsh. Despite repeated requests and entreaties, including to new Cuyahoga County Law Director Greg Huth, the county has not yet provided Ms. Glass with a single record related to her detention or attack—despite releasing some of them to the press.

The case is entitled State of Ohio ex rel. Chantelle Glass v. Clifford Pinkney and Cuyahoga County, Case No. 2019-0778. The complaint can be found here.

Ms. Glass is represented by Subodh Chandra and Brian Bardwell.