Now, even if it is clear that a police officer arrested you in retaliation for your exercising your free-speech rights, you generally have to prove the officer lacked probable cause for the arrest. But it's easy for police to concoct a charge. 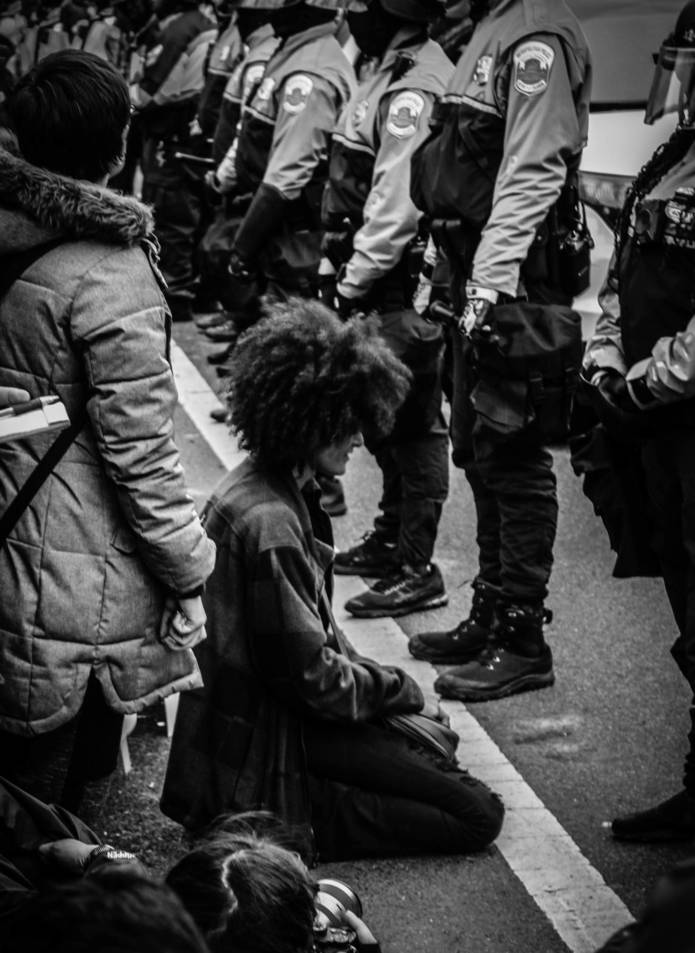 Photo by Spenser on Unsplash

On May 28, 2019, the U.S. Supreme Court weighed in (again) on a hot-button issue for civil-rights lawyers: under what circumstances may a criminal defendant allege that his arrest was in retaliation for exercise of his First-Amendment rights? In what may prove to be a severe blow to this most cherished of our rights, the Court, in Nieves v. Bartlett, 139 S.Ct. 1715 (2019), held that, when probable cause exists for the arrest, the defendant’s retaliation claim generally “fails as a matter of law.”

The facts and history of the case.

Russell Bartlett was attending a weeklong winter sports festival, known as “Arctic Man,” in the mountains near Paxson, Alaska when he encountered officers Luis Nieves and Bryce Weight, who were questioning other festivalgoers. Bartlett appeared intoxicated, according to the officers, and began yelling at the officers to leave and exhorting an underage attendee not to speak with police. When he stepped too close to Officer Weight, however, Nieves perceived a threat and immediately arrested him, charging him with disorderly conduct and resisting arrest. As Bartlett was being handcuffed, Nieves allegedly scoffed “[B]et you wish you would have talked to me now.”

Although the charges against him were ultimately dismissed, Bartlett sued the officers under the federal civil-rights statute, 42 U.S.C. § 1983, claiming that they had arrested him in retaliation for his refusal to speak with Nieves and his intervention in Weight’s conversation with the underage partygoer. Finding that probable cause supported Bartlett’s arrest, the district court dismissed the claim.

The Supreme Court’s ruling: to prove a retaliatory arrest, the plaintiff must plead and prove the absence of probable cause for the arrest.

While the Ninth Circuit reversed, holding that the existence of probable cause did not foreclose Bartlett’s retaliation claim, the Supreme Court, in an opinion written by Chief Justice John Roberts, disagreed. “The plaintiff pressing a retaliatory arrest claim,” according to the Court, “must plead and prove the absence of probable cause for the arrest.”

How did the Court reach this result? It proceeded from the premise that a retaliatory-arrest claim must meet a “but-for” causation test. A successful claimant, the Court observed, must demonstrate that he would not have been arrested but for the officer’s retaliatory animus. The existence of probable cause, however, provides a strong reason for concluding that “that action would have been taken anyway” whether or not the officer acted from a retaliatory motive.

As the Court put the point: “because probable cause speaks to the objective reasonableness of an arrest, …, its absence will—as in retaliatory prosecution cases—generally provide weighty evidence that the officer’s animus caused the arrest, whereas the presence of probable cause will suggest the opposite.” And objective tests, for the Court, are normally to be preferred to subjective ones: “Legal tests based on reasonableness are generally objective, and this Court has long taken the view that evenhanded law enforcement is best achieved by the application of objective standards of conduct, rather than standards that depend upon the subjective state of mind of the officer.”

An officer’s motives are relevant, for the Court, only if a plaintiff is first able to show lack of probable cause. Assuming he makes that threshold showing, he faces a second burden: “The plaintiff must show that the retaliation was a substantial or motivating factor behind the [arrest], and, if that showing is made, the defendant can prevail only by showing that the [arrest] would have been initiated without respect to retaliation.”

The Court’s near-categorical insistence on proof of lack of probable cause admits of only one exception—for cases where “a plaintiff presents objective evidence that he was arrested when otherwise similarly situated individuals not engaged in the same sort of protected speech had not been.” The Court used jaywalking as an example. If police overlook scores of obviously guilty jaywalkers but zero in on a vocal opponent of police practices, then a retaliatory motive is the more likely explanation of the arrest and “probable cause does little to prove or disprove the causal connection between animus and injury.”

The dissents and concurrences pointed out the unfairness and illogic of the Nieves majority's opinion.

A handful of dissenting (and concurring) opinions identify the illogic of the majority’s all-but-absolute requirement that a First Amendment plaintiff prove lack of probable cause for his arrest. For Justice Gorsuch, the fact that probable cause may defeat a claim for false arrest or false imprisonment “doesn’t mean probable cause is also enough to defeat a First Amendment retaliatory arrest claim. The point of this kind of claim isn’t to guard against officers who lack lawful authority to make an arrest. Rather, it’s to guard against officers who abuse their authority by making an otherwise lawful arrest for an unconstitutional reason.” (Emphasis in original.) “If the state could use [criminal] laws not for their intended purposes but to silence those who voice unpopular ideas,” Gorsuch continued, “little would be left of our First Amendment liberties, and little would separate us from the tyrannies of the past or the malignant fiefdoms of our own age. The freedom to speak without risking arrest is ‘one of the principal characteristics by which we distinguish a free nation.’”

Echoing the same dissatisfaction with the majority’s new standard, Justice Sotomayor rightly observed that, “while probable cause has undeniable evidentiary significance to the underlying question of what motivated an arrest—some arrests are demonstrably retaliation for protected speech, notwithstanding probable cause of some coincidental infraction. … Plaintiffs should have a meaningful opportunity to prove such claims when they arise.” She also recognized that the Court’s hard-and-fast rule “will breed opportunities for the rare ill-intentioned officer to violate the First Amendment without consequence—and, in some cases, openly and unabashedly.” “The power to constrain a person’s liberty is delegated to law enforcement officers by the public in a sacred trust,” Justice Sotomayor observed. “The First Amendment stands as a bulwark of that trust, erected by people who knew from personal experience the dangers of abuse that follow from investing anyone with such awesome power.”

Nieves’s impact on our protection from First Amendment retaliation will be severe—although knowledgeable civil-rights lawyers may be able to work around it... sometimes.

At Chandra Law, where we handle numerous First Amendment-retaliation cases on a regular basis (see linked blogposts on this page—they are instructive about what police can do), we are concerned that the rigid, one-size-fits-all standard the Nieves Court imposed will lead to serious injustices and will embolden police officers to use the thinnest of pretexts to arrest and prosecute people for retaliatory reasons—and then point to a fig leaf of probable cause to avoid responsibility. After all, officers can make up almost any sort of vague offense to charge someone. (I.e., "disorderly conduct," "resisting arrest"—even if the arrest was bogus to begin with, "disrupting a lawful meeting," etc.)

Other commentators agree. Professor Garrett Epps in an article for The Atlantic entitled "John Roberts Strikes a Blow Against Free Speech," writes, "the decision will make it harder to hold officers to account when they—as we all know they sometimes do—arrest citizens in retaliation for speech they don’t like. It can occur in a political-protest situation or simply during everyday dealings between police and people."

Why did the Supreme Court do this then? They expressed an overly protective concern of police officers making split-second judgments at the scene—and an underappreciation for the First Amendment right to free speech, the role of courts, and above all the role of juries to sort out the facts of whether an arrest was retaliatory. They do it all the time, and in our experience, they generally do it well. If there is good evidence of retaliatory motive, and the officers’ explanations fall under scrutiny, juries of our fellow citizens will do the right thing. One of the problems with Nieves was that the evidence of retaliatory motive (at least as reported by the Supreme Court) was pretty thin.

So this was a case of bad facts in one case making bad law for the rest of us. Perhaps forever. The Supreme Court should have never taken this case; Chief Justice Roberts was simply wrong when he described the Nieves case as “typical.”

The sort of disrespect for juries and over-obsession with having fewer lawsuits displayed by the Court’s majority in Nieves, is, in our view as experienced civil-rights lawyers who do this work every day, undermining the role of federal courts to protect our precious constitutional rights.

Making a whole big category of lawsuits go away with a few clicks of the keyboard does not make the underlying disputes and concerns go away. It just drives them into the shadows, sows discontent, and undermines public confidence in the courts and our precious Constitution. Nieves underscores that too many Supreme Court justices (and many federal judges) reside so far up in their ivory towers speculating about the proper incentives needed that they do not understand the reality on the ground of police-civilian interactions. If courts give police too much free reign and officers are presumed (by justices most of whom have never had a negative police interaction) to be acting in good faith all the time, then we are no longer a free country, but inching toward being a police state. With little-to-no accountability.

We do believe that knowledgeable attorneys may, from time to time, be able to investigate their First Amendment retaliatory-arrest cases and carefully plead the complaints they draft for clients to avoid a Nieves problem. And other claims, such as for federal and state malicious prosecution and wrongful and false arrest, may be available.

But unsophisticated counsel (and their clients) will find themselves out of luck as otherwise good cases get thrown out of court.

You are not alone. Call The Chandra Law Firm LLC today.

Our Cleveland-based boutique litigation firm provides large-firm skills, experience, and resources with small-firm personal attention to your case's unique needs and goals. It is why clients throughout Ohio and across the United States have turned to our attorneys to hold governments accountable for First Amendment retaliation.

Our lawyers can send a strong message that you intend to seek the justice you deserve for the retaliation you face.

You can reach our firm, which serves clients throughout Ohio and the nation, by calling 216-578-1700 or by filling out our online contact form.

One of our intake specialists will take detailed information for attorney review. They are highly trained at obtaining the information needed to evaluate your case.