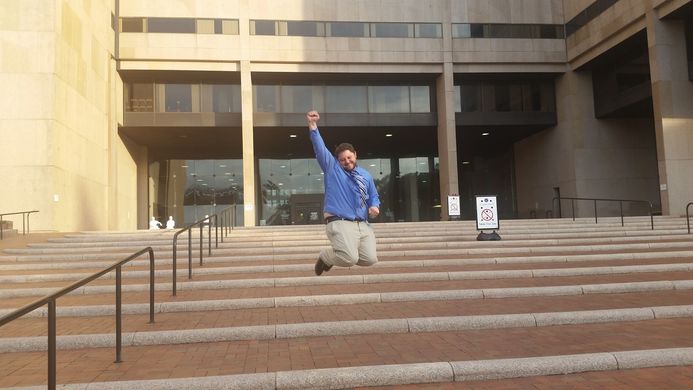 Anthony Novak momentarily celebrates his August 11, 2016 jury acquittal after his criminal trial for mocking Parma police on Facebook. That was before reality set in: he realized that he could still be subjected to retaliation were he to continue his free-speech activities. (Photo credit: Michelle Novak; used with permission.)

In addition to parody posts announcing that the police passed a law to starve the homeless out of Parma, and would be conducting free experimental abortions in police vans, the spoof account criticized the Parma officers' intelligence ("We No Crime"), qualifications (disdaining civil rights), racial sensitivity (ignoring an armed white robber to hunt an African-American loiterer), and raised other issues of public concern.

According to the complaint, when Parma police officers learned about the account, they stopped what they were doing and moved swiftly to punish Mr. Novak for mocking them. The officers sent letters to Facebook and news outlets threatening Novak, and launched a criminal probe, even though, the complaint alleges, they would have known that his speech was not a crime.

The complaint further alleges that even after seizing all of Mr. Novak's computers, video game consoles, and cellphones―some of which Parma has still not returned to him a year-and-a-half later―they had no evidence of a crime. They arrested Mr. Novak and nevertheless arranged for him to be criminally charged.

But in August 2016, a jury acquitted Mr. Novak after a short criminal trial―even though the prosecutors asked that the jury not be instructed on Mr. Novak's First Amendment rights.

"Police officers are supposed to protect our rights, not violate them," said Subodh Chandra, one of Mr. Novak's attorneys. "As Americans, we have the right to criticize government officials―including police officers―even if those criticisms are insulting or petty, without fearing criminal prosecution. Parma's retaliation against Mr. Novak for his speech is expected in banana republics, not America. Parma apparently failed to train its officers to respect fundamental constitutional freedoms."

Mr. Novak's claims against Parma, its police officers, and an as-yet-unidentified law-enforcement official include numerous alleged violations of the First, Fourth, and Fourteenth Amendments to the U.S. Constitution, as well as federal and state-law claims for privacy violations, malicious prosecution, false reports, perjury, falsification, obstruction of justice, and other claims.

The complaint alleges that Mr. Novak's speech continues to be chilled as he fears renewed retaliation were he to continue his parody Facebook page about Parma police. He thus seeks an injunction against Parma to protect his future speech.

The case was filed in the U.S. District Court for the Northern District of Ohio, and captioned, Novak v. City of Parma, et al., Case No. 1:17-cv-02148. It is assigned to Judge Dan Aaron Polster.

The federal civil-rights complaint [UPDATED: First Amended Complaint filed on October 18, 2017) can be found here, while the exhibit to the [First Amended] Complaint, which is the complete transcript of the August 2016 criminal trial that Mr. Novak endured before the jury acquitted him, can be found here.