Stacy Hinners and her husband Jason had just filed a lawsuit the day before to hold the mayor and council accountable for secret, backroom financial deals violating Ohio’s Open Meetings Act.

HURON, OH — Last night, the city of Huron’s mayor, Brad Hartung, ordered police officers to seize and forcibly eject community activist Stacy Hinners from a city council meeting five minutes after she used the meeting’s public-comment period to inform the audience that she and her husband had filed a lawsuit to stop city officials’ illegal conduct. The conduct included secret, backroom financial deals violating Ohio’s Open Meetings Act. On the council agenda that night were two measures to ratify the illegal acts.

After removing Ms. Hinners from the meeting, police officers—who were acting at the mayor and police chief's direction—cited her for supposedly “Disturbing A Lawful Meeting” under Huron Codified Ordinance 509.04. That provision, which parallels a state statute, provides as follows:

(a) No person, with purpose to prevent or disrupt a lawful meeting, procession or gathering, shall do either of the following:

(1) Do any act which obstructs or interferes with the due conduct of such meeting, procession or gathering;

(2) Make any utterance, gesture or display which outrages the sensibilities of the group.

(b) Whoever violates this section is guilty of disturbing a lawful meeting, a misdemeanor of the fourth degree. (ORC 2917.12)

Mayor Hartung returned to his seat, then stepped out of the council chambers out of a back door, and returned. At that moment, just as Ms. Hinners alleged that the City Council had paid the city manager $15,000 in bonuses without properly deciding those issues in an open public meeting as Ohio law requires, Hartung cut Ms. Hinners off at two minutes and 52 seconds—falsely insisting she had spoken for three minutes.

Ms. Hinners asked for more time to complete her statement.

Ms. Hinners again asked that she be “afforded the same privilege” as people she identified who had been given five minutes at the last meeting, and pointed out that the mayor rarely enforced any supposed three-minute rule—which is also not in the Rules of the Huron City Council.

Hartung then told Ms. Hinners, “you’re going to be charged with disrupting a public meeting” and complained that she was “you’re making a mockery of the City Council meeting by turning and talking.”

Ms. Hinners quietly watched the meeting continue as other audience members spoke. More than five minutes later, two police officers entered the room and towered over her, demanding she leave for questioning. They did not inform her she was under arrest or read her her constitutional rights.

When she asked them what she did, and an officer—relying on whatever he had been told—began to respond “apparently, disrupting—” at which point Hartung interrupted, “disrupting a public meeting.” He commanded the officers to “remove Mrs. Hinners from City Hall.”

Ms. Hinners urged caution over this unconstitutional action: “Mayor, it’s up to you,” Ms. Hinners said.

“Yes. Remove. Remove her,” Hartung demanded, not taking the hint. “Yes. If you can’t get up and respect like everyone else does. I understand you’re upset about stuff. But this is a City Council meeting. You stand up and you do it. You don’t grandstand. You don’t do that, you don’t turn around, and you don’t make the rules.”

Ms. Hinners—a former civil-rights lawyer fully aware of her legal rights—chose to stay at the public meeting instead of submitting to an interrogation: “I’m not leaving. I didn’t do anything to disrupt. I took my three minutes. And I sat down. I requested that I be treated the same as every other citizen who comes to this meeting.

Hartung responded: “First, you star— I asked you to step to the podium and address, and you’re creating a scene now. Please remove her.”

The United States Constitution does not require Americans to “respect” government. Nor does it prohibit citizen “grandstanding”—however a public official offended by criticism might define it.

Nor does any law or rule exist that requires a citizen to face Huron’s city council at the podium [lectern] rather than choose to also be clearly heard by the public and the council.

Ms. Hinners responded, “You created a scene, sir, by calling the police and abusing your power.”

The video shows the officers shoving Ms. Hinners against the wall, and her teetering on her heels, as she seeks to persuade them not to engage in unconstitutional conduct and challenges Mayor Hartung on his abuse of power.

“We are,” one replied, even though both had seen Ms. Hinners sitting calmly and quietly when they entered the room and had witnessed no disruption.

The attack on this local mom, attorney, and civic activist shocked the consciences of those in attendance. On Council’s video, gasps can be heard, as people say things like:

That is, it was Hartung’s actions that “outrage[d] the sensibilities of the group” as prohibited by the disturbing-a-lawful-meeting ordinance.

“You can come to the meeting and act like an adult, you get treated like an adult,” Hartung warned the audience, as officers forcibly removed Ms. Hinners from the room.

Video of the incident captured by Ms. Hinners’s 13-year-old son, who witnessed his mother being abused, shows a local man stood up and urged the officers, touching one gently as they manhandled Ms. Hinners, “Hey, come on. You can’t do this.”

But to no avail.

As Ms. Hinners was dragged out of the room—the astonishment evident on her face—she said to the public, “This is the kind of City we’re running here, folks.”

Ms. Hinners was born and raised in Huron and has had a distinguished career as a lawyer, including as a civil-rights lawyer. Among the cases she has handled are those involving the First Amendment to the United States Constitution, which protects the right to free speech and to petition our governments. Her parents still live in Huron and she and her husband Jason Hinners raise their two children there.

She is due for arraignment in Huron Municipal Court on Friday, May 17, at 8:30 am, where she will plead “not guilty.”

Subodh Chandra, Ms. Hinners’s lead counsel and a former federal prosecutor and Cleveland law director and prosecuting attorney, said, “By ordering police to abuse Ms. Hinners for her speech, Mayor Hartung displayed disdain for the Constitution and what it means to be an American. He will be held accountable. He may be intoxicated by his power as a small-town dictator, but he picked the wrong family on which to inflict his abuse of that power. They will fight to reestablish the rule of law in Huron.”

Chandra added, “Huron’s residents should rise up and make themselves heard at City Council, by mail, by email, by phone. The only way to resist tyranny is for citizens to stand up.”

“Brad Hartung has forfeited his right to govern.”

Huron city officials can be reached through this link: https://www.cityofhuron.org/government/city-council 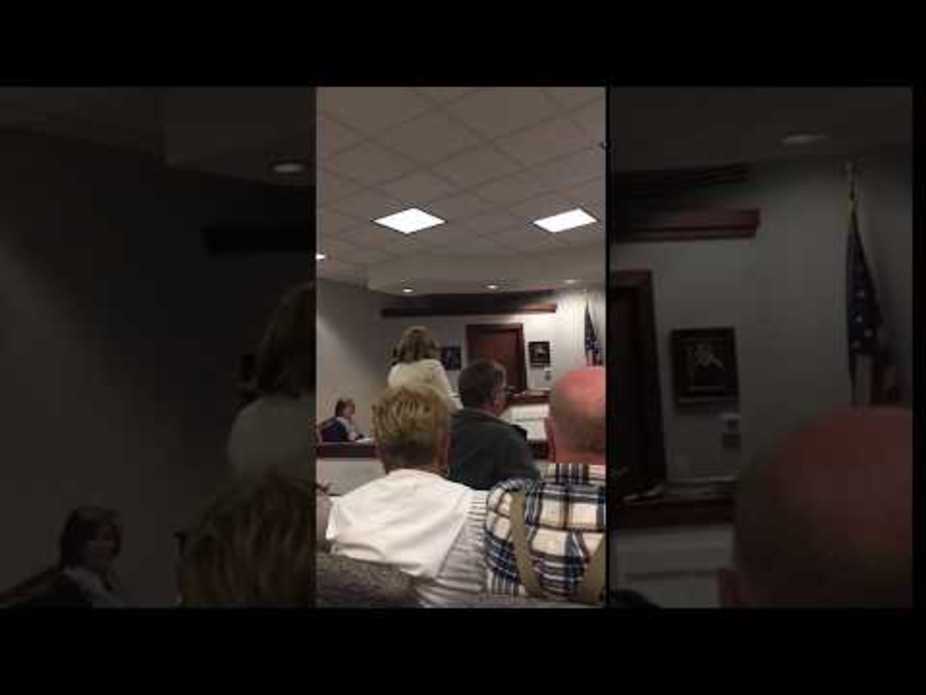 Huron Mayor Brad Hartung points at Stacey Hinners—moments before he has police seize her. 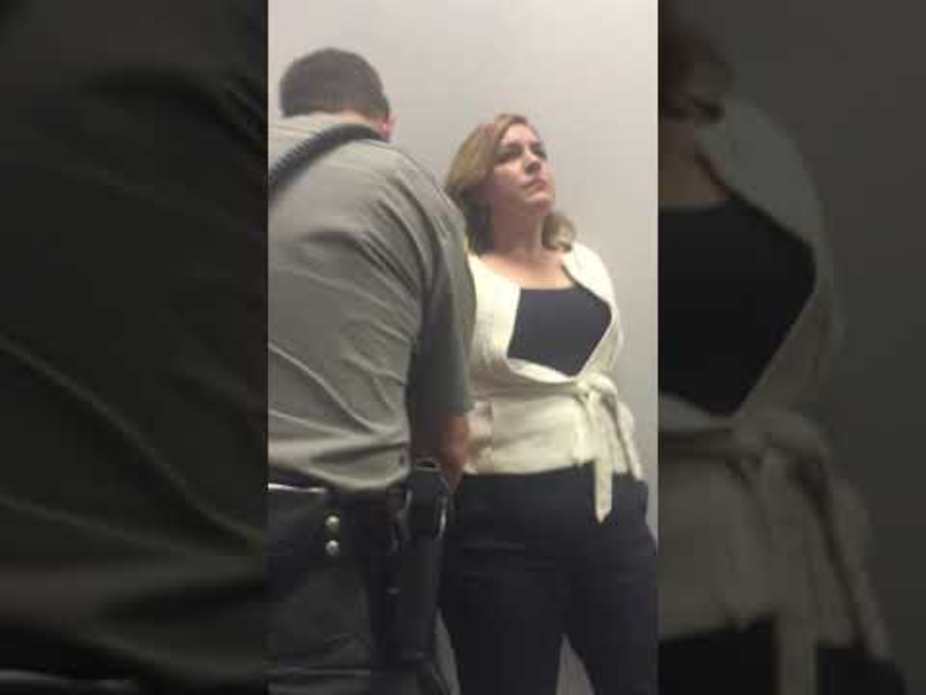 Huron doubles, triples, and then quadruples down on unconstitutional charge against activist Stacy...