If someone has committed a crime against you, you can probably go to civil court to seek damages and justice. 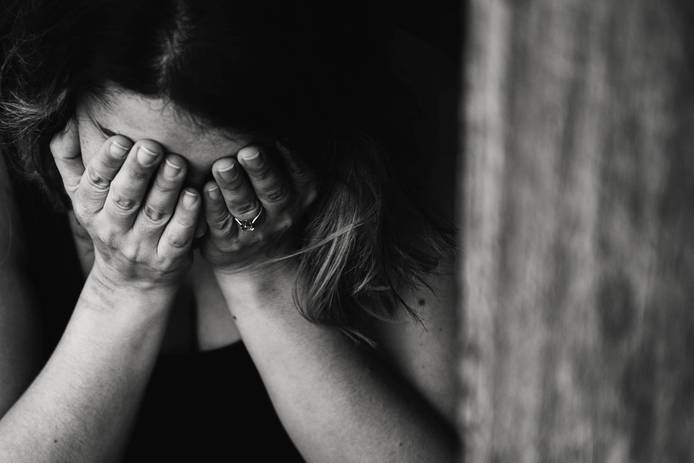 As long as there is some criminal statute that prohibits the misconduct by which you’ve been injured—and this includes a wide swath of conduct ranging from sexual assault, theft, police brutality, certain forms of public-official misconduct, lying on public documents, and a host of other misdeeds—you may be able to go to court and seek damages. The statute is a powerful tool that has helped us to protect clients’ rights and get legal redress.

R.C. 2307.60 provides that “anyone injured in person or property by a criminal act” can sue in civil court, and may recover full damages, unless such an action is specifically prohibited by law. (While some criminal statutes expressly provide for a civil remedy, R.C. 2307.60 is written broadly enough to cover just about any Ohio state- or local-law criminal violation.) And if allowed elsewhere in the law, a plaintiff may also recover attorneys’ fees and punitive or exemplary damages in the same suit.

Importantly, when a defendant has been convicted of a violent crime punishable by more than a year's imprisonment, the statute prevents him from later denying, in a civil action brought under R.C. 2307.60, any fact essential to that conviction (unless he can demonstrate extraordinary circumstances).

At Chandra Law, we are pioneers in representing plaintiffs under R.C. 2307.60—causes of action, thanks to our case, now known as "Buddenberg" claims

The Chandra Law Firm LLC handled both of the Supreme Court of Ohio's cases interpreting R.C. 2307.60—and helped pioneer the statute's aggressive use to win major victories for clients. Indeed, it was in one of our cases—Jacobson v. Kaforey—that the Supreme Court of Ohio in 2016 first recognized the statute’s sweeping meaning for crime victims. (Before Jacobson many Ohio and federal courts wrongly didn’t view R.C. 2307.60 as creating a civil right of action for crime victims.) We have also defended against, and defeated, desperate legal maneuvers by powerful interests who sought to weaken victims’ ability to seek compensation under the statute.

In Jacobson, our client Joanna Jacobson sued several Ohio hospitals and an attorney and registered nurse named Ellen Kaforey for the crimes of unlawful restraint, kidnapping, and child enticement when Kaforey removed her (Joanna’s) seven-year-old daughter from her custody and transported her to Florida. The Ohio Supreme Court determined that the alleged crimes supported a civil claim for damages under R.C. 2307.60’s plain meaning. The decision was a decisive victory for crime victims in their quest to seek justice. (Chandra Law’s Donald P. Screen argued the case before the Ohio Supreme Court—WATCH video of the oral arguments here.) 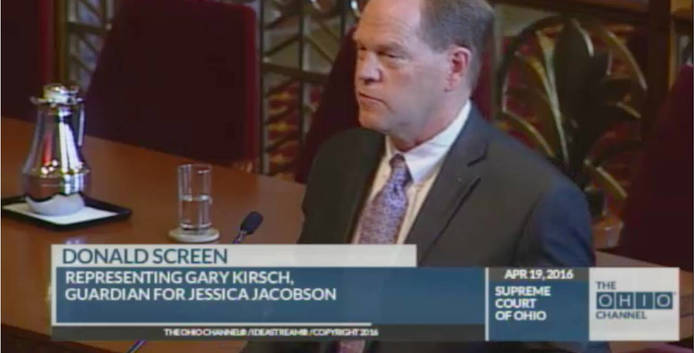 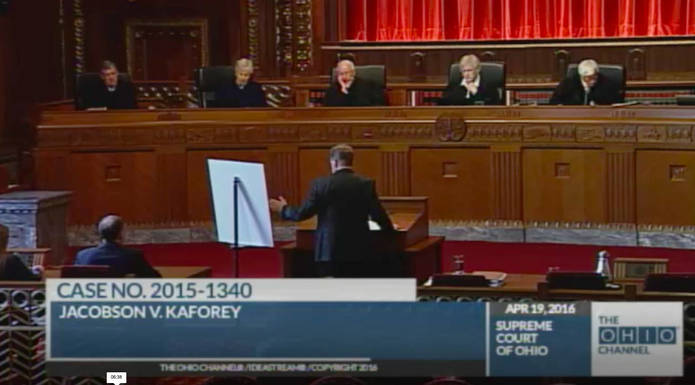 In 2020, in Buddenberg v. Weisdack, Chandra Law obtained another groundbreaking victory interpreting R.C. 2307.60. The Supreme Court of Ohio unanimously held that R.C. 2307.60 does not require a criminal conviction before a crime victim may sue a perpetrator for civil damages.

Chandra Law is using R.C. 2307.60 to help whistleblower Rebecca Buddenberg, a health administrator, sue her ex-boss, former Geauga County public health commissioner Robert Weisdack. Ms. Buddenberg’s federal lawsuit, which include claims for First Amendment retaliation and Title VII retaliation, assert that Weisdack unlawfully retaliated against Buddenberg after she alleged unequal pay practices and potential ethical misconduct by Weisdack in steering contracts to himself. Weisdack's lawyers tried to eviscerate R.C. 2307.60 by arguing—contrary to the statute’s plain language—that only crime victims whose perpetrators have been convicted may sue for civil damages those who harmed them with criminal acts.

Such an unwarranted change in the law would have prevented many crime victims from even getting near a civil courtroom, because they’d have been subject to the whim of prosecutors, judges, plea bargains, and criminal-trial juries. The case pitted powerful, special insurance-industry and defense-bar interests against crime victims. (Chandra Law managing partner Subodh Chandra argued the case before the Ohio Supreme Court—WATCH video of the oral arguments here.) 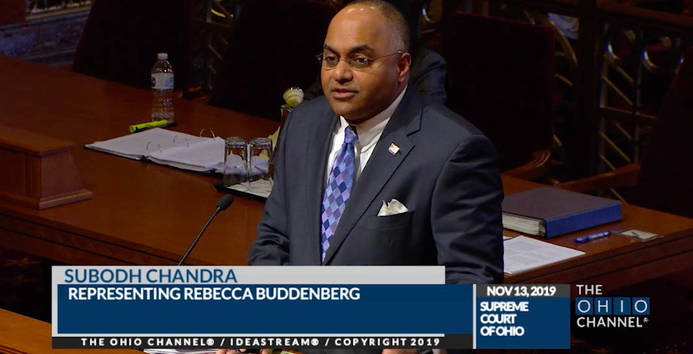 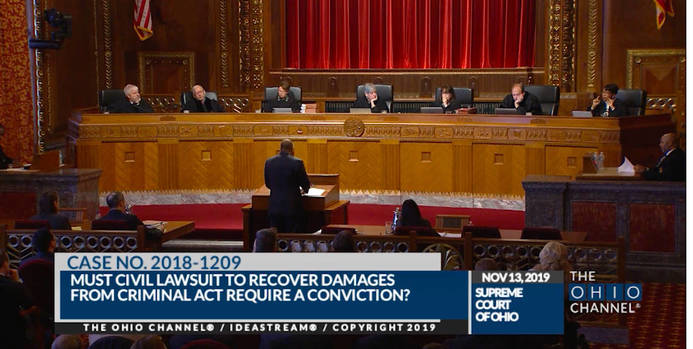 When we are drafting a civil complaint or a demand letter for our clients, we always pour through the criminal code searching for additional claims that can be imported into the civil complaint as civil-action-for-damages-for-criminal-acts claims. One advantage of adding these claims is being able to refer, throughout the civil proceedings, to criminal acts and statutes, which paints defendants—accurately—in the bad light they deserve. It really puts defendants on the defensive. Another advantage is that Revised Code Section 2307.60 provides an alternative route to collect damages. And just as often these claims befuddle and shock defense lawyers in insurers, many of whom have never seen them.

If you visit our blog and scroll back reading the stories about the civil-rights cases we've filed, you'll find countless examples of cases that include claims under Section 2307.60, citing all sort of provisions of Ohio's criminal code.

Ohio's 10th District Court of Appeals has held that the statute of limitations for bringing an R.C. 2307.60 Buddenberg claim is six years. Some federal and other state courts have held that it is one year. We think six years is right, because the 10th District was the only court to engage in the proper analysis required by the Ohio Supreme Court, but you should talk to a lawyer as soon as possible.

The Chandra Law Firm LLC has helped to shape Ohio’s law in the area of civil liability for criminal acts. We’ve led the way in using statute R.C. 2307.60 to help crime victims, people who have been wrongfully arrested, employees who have been retaliated against, and others whose rights have been violated.

If you’ve been injured by criminal act (or think you may have been), and believe the perpetrator has funds or insurance to compensate you, you can reach our firm, which serves clients throughout Ohio, by speaking with one of our intake specialists at 216-578-1700 or, better yet, by filling out our online contact form.

We fight for whistleblowers who shed light on wrongdoing including fraud, safety violations, and sexual harassment, and protect them from employment retaliation. We pursue cases under the federal False Claims Act and other statutes.

We pursue justice for families left reeling from a wrongful death, and protect the interests of businesses in high-stakes litigation, including related to trade-secret disputes and non-competition agreements.

For what kinds of crimes could I sue someone for in civil court?

Can I take the person who committed a crime against me to court even if...

If someone commits a crime against me, may I sue them for damages?