Cleveland, OH — Yesterday, Gregory Lee “Joey” Johnson filed a lawsuit in the U.S. District Court for the Northern District of Ohio arising from his July 20, 2016 arrest and subsequent prosecution for flag burning at the 2016 Republican National Convention in Cleveland. Mr. Johnson and 16 other protestors were prosecuted.

Mr. Johnson, a San Francisco resident, would know. He was the Johnson in Texas v. Johnson, the landmark 1989 U.S. Supreme Court case establishing that burning the American flag is protected free speech. Mr. Johnson is a supporter of the “Revolutionary Communist Party” who protests what he perceives as American jingoism, imperialism, and capitalism. It was his flag-burning outside of the 1984 Republican National Convention that led to the Texas v. Johnson decision vindicating his rights. He came to Cleveland in the same spirit, this time to also protest the rising fascism represented by Donald Trump.

The complaint alleges that 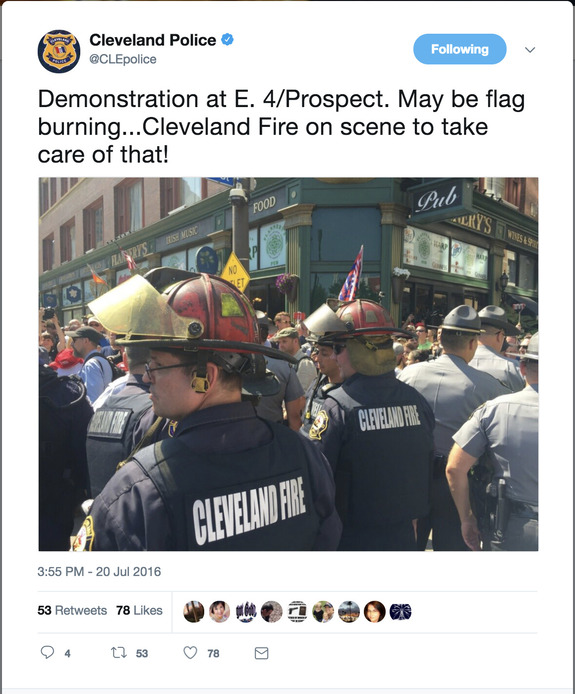 And then Cleveland police tweeted affirmation that they had done so: 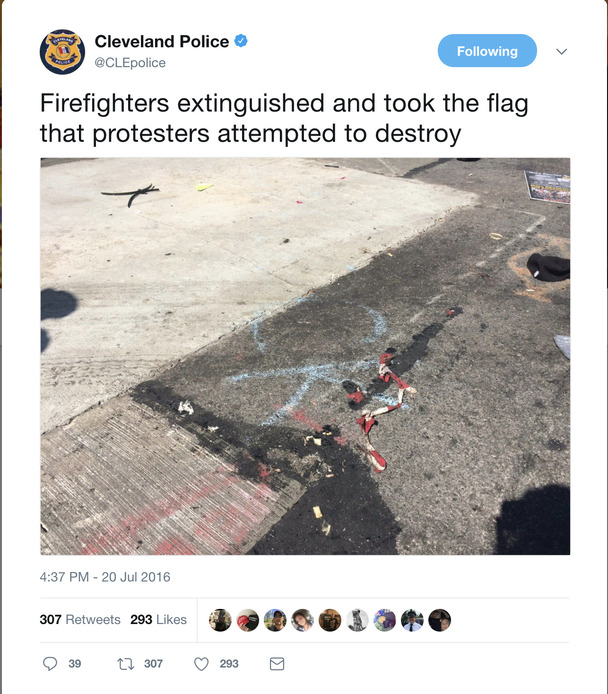 The complaint also alleges that the City's officer-training materials entitled “Crowd Management and [t]he Protection of Constitutional Rights,” which Chief Williams invoked in a court hearing related to the protester prosecutions, contained only a single page that could conceivably provide direction to officers confronting symbolic flag-burning. And that page suggested police officers should provide no protection to protestors. Instead, the page (depicted in paragraph 69 of the complaint) instructed Cleveland police officers to remain vigilant and immediately extinguish symbolic speech. Entitled “Officer and Crowd Engagement,” the page, a PowerPoint training slide, instructed City personnel to “be vigilant for activities such as burning of objects,” and directed them, “at the first sign of such activity,” to “deploy a quick response plan to immediately address the activity including extinguishing any fires."

One of Mr. Johnson’s counsel, Subodh Chandra, said, “While most Americans find flag-burning abhorrent, even high-school students know that it is constitutionally protected free speech. Even Justice Scalia said so, nearly 30 years ago. Cleveland police officers would and should know this if they were properly trained. Officers’ failure to protect Mr. Johnson—and indeed their decision to arrest and prosecute him, violated the Constitution. They must be held accountable to the rule of law.”

The First Amended Complaint, along with its exhibits, is available here: