In 2010, Cleveland police attacked a disabled teen and shouted racial slurs at his family. Today, the cops still have badges and guns.

Despite repeated requests, chief and safety director won't say whether they have terminated or disciplined Officer Brian Kazimer or Sgt. Dan Crisan for attacking Juan Ortiz and shouting racist slurs at his family. The suit cost Cleveland $250,000.

CLEVELAND, OHIO―Today, Ramón Ortiz filed a lawsuit to enforce a public-records request to the City of Cleveland for records that would reveal whether the police chief or safety director have taken any disciplinary action against officers for the August 16, 2010 attack on Mr. Ortiz's son Juan, and for shouting racial slurs at the Ortiz family. Juan Ortiz suffers from severe Down syndrome, which is visibly evident in his facial features. At the time of the attack, he was under 4'11" tall, weighed approximately 118 pounds, and was 16-years old. His ancestry is Puerto Rican and his complexion is dark. 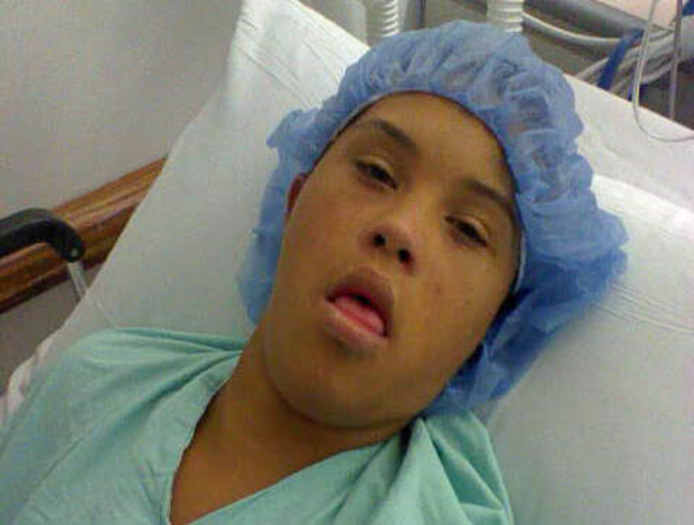 Sixteen-year-old Juan Ortiz in the hospital after Cleveland police officers slammed him against a hot car and hurt him.

One year ago today, the City agreed to pay a $250,000 settlement stemming from the 2010 incident, but no indication exists that Cleveland has held the officers to account for their actions.

According to the 2011 federal civil-rights complaint the Ortiz family filed, on August 16, 2010, Juan was playing in the yard at his west-side apartment complex listening to his Walkman. There was a robbery reported near the complex, and police were looking for a good-Samaritan white male in his fifties, possibly wearing a red shirt, who had turned in a wallet to the apartment manager. Patrol officer Brian Kazimer shouted at and began chasing Juan.

Startled, Juan ran to his parents on the other side of the parking lot. According to eyewitness testimony, Kazimer wrenched Juan from his mother's arms and slammed him against a parked SUV. Kazimer pinned Juan to the hot car―causing him to sustain burns to his lower abdomen requiring surgery. Kazimer yanked Juan's arms over his head, employing grossly excessive force to restrain a non-resisting suspect who Kazimer admitted had "surrendered" before Kazimer laid a hand on Juan. Kazimer told Juan's parents they were "lucky" he "didn't shoot" Juan.

The attack left Juan suffering from post-traumatic stress disorder. The Ortiz family had to relocate out of state due to Juan's visceral and panicked reaction to subsequent sightings of Cleveland police officers and vehicles.

Numerous witnesses testified under penalty of perjury to the bigotry that permeated the violent detention of Juan including vulgar, obscene, and racist language toward Juan and his parents, who originate from the United States territory of Puerto Rico:

These white-supremacist views have no place in Cleveland's police force. Yet Kazimer and Crisan remain on the force today.

The family reported the attack to the City's Office of Professional Standards the following day. After briefly investigating, OPS sustained the charges against the officers and on November 9, 2010, the Civilian Police Review Board recommended that then-Chief Michael McGrath impose discipline.

But over seven years later, City officials refuse to tell the Ortizes whether it has done anything to hold these officers accountable.

Perhaps 12-year-old Tamir Rice would not have been shot dead by Cleveland police four years later in a park just a few miles from where Juan was attacked.

But instead, the City promoted Crisan to sergeant from patrol officer with no apparent consideration of the incident. This seems to have breached ¶ 318(h), at a minimum, of the City's Consent Decree with the U.S. Department of Justice. That paragraph requires that the City take pending discipline into account in the promotions process.

Our office filed Juan's initial federal civil-rights complaint against the officers on July 25, 2011. While the case was pending, the Chandra Law Firm continually followed up with the City about why the officers had not been disciplined. The firm sent letters in January 2013 and January 2014 to then-Cuyahoga County Prosecutor Tim McGinty, then-Chief Assistant City Prosecutor Victor Perez, then-Chief Michael McGrath, and OPS Chairman Thomas Jones requesting criminal prosecution or at least appropriate disciplinary action against these officers.

We received no substantive responses.

Our follow-up efforts included public-records requests to the City, simply trying to find out whether Chief Calvin Williams and Public Safety Director Michael McGrath have done their jobs and disciplined the officers.

We learned in September 2016 that the City had for years withheld public records about pre-disciplinary hearings set for Kazimer and Crisan in August 2011 that the chief held in abeyance pending the litigation's outcome. The City never produced the records about Kazimer and Crisan as part of its response to a federal-court subpoena for such records―even though the records were plainly responsive to the subpoena.

There was and is no written City policy permitting officers to avoid discipline because they were or are being sued for misconduct.

In October 2016, we then filed a federal civil-rights complaint for Juan Ortiz against the Cityfor its failure to train the officers and its apparent informal policy and practice of not disciplining them.

After the City in October 2016 settled these federal civil-rights cases for $250,000 on the eve of trial, we sent a December 7 letter to Cleveland Police Chief Calvin Williams asking him to thoroughly investigate the officers' conduct and appropriately discipline these officers to quell racially biased and abusive policing in our City. The letter explained that the family would be unable to put this incident behind them until the officers were held accountable, per the Civilian Police Review Board's 2010 recommendation

In a December 8, 2016 follow-up letter to Chief Williams, we explained how promoting Crisan to Sergeant in the fall of 2015 without considering the disciplinary charges against him violated ¶ 318(h) of the Consent Decree in United States v. City of Cleveland.

We receive no response to either letter. We forwarded this correspondence to the federal-court- appointed monitor in charge of implementing Cleveland's Consent Decree. Although the monitor acknowledged receipt, we are unaware of any enforcement action that was taken.

Nearly a year later―and over seven years after the attack on Juan and the racist slurs against his family―we have no evidence that these officers have been disciplined―or will ever be disciplined―for what they did.

On September 28, 2017, we sent the City another public-records request for such records.The City did not provide any records or any substantive response to the request.

The Ortiz family's quest to seek justice continues even as U.S. District Judge Solomon Oliver, who is overseeing the Consent Decree, has ordered that the City should come before him to explain why it is not acting on civilian complaints against police officers―complaints just like the Ortizes' seven-year-old complaint.

We also asked Cleveland City Council Public Safety Committee Chairman Matt Zone to prod the chief and safety director into action. But no action has occurred.

Subodh Chandra, the Ortiz family's lead counsel, said, "City officials' failure to give closure to this family by communicating that they have disciplined officers who shouted racial slurs at them and brutalized their disabled child is unconscionable, obnoxious, and just plain rude. Does anyone at the City care to do their jobs, hold officers accountable, and be kind to this family and others? Why do officers who shout racist slurs at a family still have badges and guns?"

The case to enforce the recent public-records request was filed in the Ohio Court of Claims, and is case number 5593. Here is the complaint.

A news article regarding the incident can be found here.